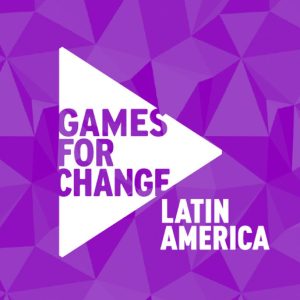 Critical views on the role of games in transforming the world. Workshops, lectures, open discussion of public policies, an unprecedented session of papers, a competitive phase (“Pitch for Change”) and acceleration of strat-ups engaged in playful social, educational and political causes.

Click and visit our subscription page, choose your sessions and bring your critical perspectives!

São Paulo, November, 15 – Celebrating its tenth edition, the Games for Change Latin America Festival hosts the first public debate on the upcoming public policies for the game industry, while engaging game devs and the creative industries with educational and environmental issues in digital and non-digital games. The event will be streamed live, culminating with the fourth edition of the Pitch for Change competition.

“For the first time in Brazilian history, the presidential elections integrated the arts, culture and games as a key policy issue. That´s not by chance, as the outgoing government implemented anti-social, anti-science, anti-culture and anti-environmental policies favoring deregulation of gun controls, destruction of the Amazon and a radical dismantling of public education”, according to the President of G4C Latin America, Gilson Schwartz. “The pandemic also brought structural racism to the fore, so we are proud to celebrate Black Consciousness Day in Brazil at the closing ceremony, after the announcement of awards”.

“Lula Play” was published by a group of indie developers early in the campaign trail and was openly subscribed by the elected president. There is hope that new policies will rebuild the nation´s investments in social policies, education and culture leveraged by games targeting children and youth. The X G4C Latin America Festival will also showcase the awardees of the Cross-Cultural Impact Jam, co-promoted with Games for Change and UNITY in the first week of November. New digital games such as “Master Lemon” (Pepita Digital), “PoN” (Ilex Games) and non-digital games such as “Macunaíma” (Coletivo Lúdico) and “Purposyum” (United Nations Office on Drugs and Crime) will be presented by creators.

Sessions focusing on the internationalization of social impact game projects will bring Latin American industry leaders and G4C Chapters for an evaluation of new cooperation strategies.

The Festival also stresses more philosophical approaches in roundtables on games and education, allegory and gender issues. The closing keynote will be delivered by Eric Zimmerman, a celebrated author and longtime contributor to the G4C scene.

More information is available on the G4C Latam website, all sessions will be streamed from November 18th  to the 20th. The final celebration party and talk-show kicks-off at 7 PM (Brazilian time) on the 20th of November and is organized by the “National Front of Hip Hop Women”, founded in 2010. Artists such as Piscila Fenics, Lunna Rabetti, Sharylaine and Meire D´Origem from the State of São Paulo, Andreia Felix from Minas Gerais, Iza Negratcha from Sergipe and Udi from Bahia will perform and debate the future of art and entertainment for change in Brazil and Latin America.